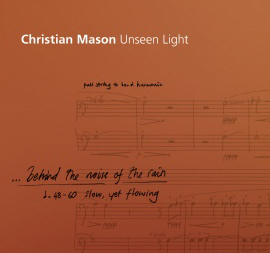 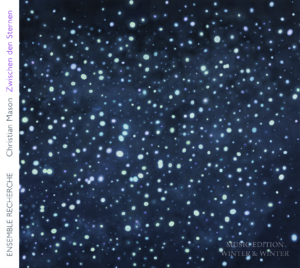 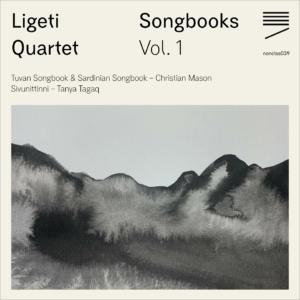 Light, of course. Radiance. It comes from – it comes in – Christian Mason’s music in the same way it comes from and in that of other composers, going back through Gérard Grisey to Guillaume Dufay and the anonymous authors of plainchant (to cite some plausible kinships), by virtue of how the sound is at one with resonance. This is so even when Mason – like his nearest musical connections, who include Scelsi, Radulescu and Stockhausen as well as Grisey – is dealing with complex, clangorous resonances: the sounds of bells, as it might be, or of wind blowing through a frost-covered tree. Such luminous congruity may derive, in Mason’s case, from an awareness of spectral music, but the stimulus may equally have been a matter more of acoustic fact and personal experience. ‘When you play the violin’, he has remarked, ‘the open E-string seems to ring in the ear.’

One might observe how this same treble E rings through Mason’s output. It is there near the start, for it initiates one of his earliest compositions, the piano piece …just as the sun is always… (2006), and, more than that, instigates the work’s bright harmonies and clear melodic shapes, a seed crystal almost constantly present or implied, until at the end it gains transposition up an octave, into further light. The sound of the open E-string is important in Mason’s first violin piece, When Joy Became Mixed With Grief (2007), and in his most recent, Learning Self-Modulation (2011). Its pitch also provides a focus in the orchestral Isolarion (2012-2013) and shines almost continuously from the warm centre of The Years of Light (2013), for a large ensemble including two female singers.

These titles alone may indicate two important Mason traits. One, of course, is the metaphor of light (‘solar’ residing within ‘Isolarion’) – more than a metaphor, it may seem, to anyone witnessing the cascading star points of his orchestral piece Clear Night (2007-2008) or the gleam of his Noctilucence (2009), for eight players. The other is his confidence in engaging with emotion – yet never with the musical language, that of major-minor tonality, through which emotion was registered in the past. Resonant consonance, effulgent in Mason’s music, has escaped the viewpoint of the triad.

The result is an expressive force of a particular kind, where emotions exist as pure states, with joyful melancholy, or melancholy joy, a recurrent type, along with the ecstasy, wonderment and exultation that belong to the sonorities of light. Such powerful immediacy the music achieves not only through its non-triadic harmonic routes but also through its nature as ritual.

This is much less a matter of form than of stance. Mason does not sculpt his music in distinct blocks, in the manner of Messiaen; even where works are divided into movements, the thrust is ongoing. That thrust certainly carries us, as listeners, in its thrall, and yet it seems to exist in another order, beyond the human. We gaze in awe, to take up an analogy suggested by Clear Night, at the multitudinous stars, and we gain from them, beyond the experience of beauty, a different measure of space and time. But we cannot think they were made for us.

Of course, the analogy is not exact: Mason’s music quite definitely was made for us, and it delights the ear with its sounds and its transformations of sounds. At the same time, though, it evokes conditions and dimensions through which we pass, as we might pass though a ceremony. Ceremonies command time, make it hover, edge forward, rush or, occasionally, dance, as for example in the passage before the ominous close of Noctilucence. Ceremonies, too, guard their silences.

Several of Mason’s titles relate to ritual, to the transcendence a ritual will imply, or to the altered state a ritual can induce. One example, where we hear and see a ritual being enacted at once by and upon the musicians, is Learning Self-Modulation, whose six movements go from syncopated excitement to a serene, strange and mesmerizing finale, where the violinist adds to her quivering solo (on a retuned instrument she has taken from behind the piano) a chanted vocalise, accompanied by the pianist on Japanese bowl gongs.
‘Modulation’ here has the sense of an effect on the self, a calming that is perhaps also an increase in alertness. But there is also modulation in a musical sense, towards the revelation of a simple modal phrase that seems to have been waiting from the beginning. Mason has a way with such phrases, which, though made of only a few notes, enter his music as magically fresh, as gifts from another world.

Such a phrase arrives, contrariwise, early in his imposing Isolarion, whose title alludes to maps that show small areas in detail while remaining hazy about the larger geography. Passing through zones of majestic force, extreme delicacy and blue-sky calm, the piece nods to Vivier at times but maintains its own inexorable progress, its own extraordinary sophistication of scoring, its own being.

In other works a quite particular instrumentation or layout will help the music similarly abscond from the familiar and discover within itself an immanence. Looking for the Land that is Nowhere (2010) features the untamed sound of the theremin whirling within and out from a close-knit nest woven by eight scordatura strings. In Time Entwined/In Space Enlaced (2008) has three separated instrumental trios, each including a percussionist, plus thirty-six players on harmonicas, suddenly appearing like so many unknown birds when the platform musicians’ exchanged messages come to a climax. And there are harmonicas again, as well as spatially distributed groups, inThe Years of Light, music of constant glow in continuous reinvention, music with the slow pulse of the rotating sun.

“The overall sonic mood is static, shimmering textures regarded for a block of time. But the textures are often lovely, especially at the end: Over a breeze of strings, the harmonicas, gently chirping, processed out of the hall and onto the Tanglewood lawn, a marvelously charming effect.” 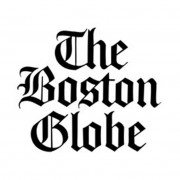